We are proud to announce our new release, Here and the Hereafter, will be out on September 30. Preorder the very limited physical CD from Projekt (Records) now and receive our previous two releases as a free bonus! It's also available to stream and download from Bandcamp.

Take a look at the official video for our new track, "The City," from our forthcoming album Here and the Hereafter. We also have a bunch of new photos from a recent promo photo shoot. Visit our facebook page to see them all.

We recently had the opportunity to perform guest vocals for Sleepthief and we're excited to announce that the track, "Asunder," is available today. It's a special bonus track on the "Reason Why" single. The track is available for purchase on Amazon MP3 and iTunes.

Starting on Monday, January 25th and continuing for two weeks, CD Baby will donate $1 of their cut from every CD sale through our website, and $1 from every download sale over $8.99 on our site, to the American Red Cross and to Mercy Corps, a Portland-based relief organization with a large presence in Haiti. With your help, they hope to raise tens of thousands of dollars.

Today is the official release date of our new CD Sub Rosa and the reissue of our debut from 2004, Pleiades. Purchase from Projekt, Middle Pillar, Amazon.com

, iTunes and other retailers. 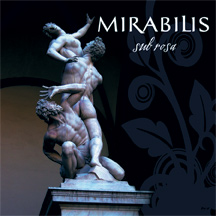 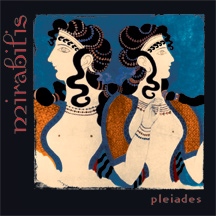 Projekt Records and Middle Pillar are proud to present the long awaited brand new album from Mirabilis, Sub Rosa, plus the re-issue of their debut album Pleiades. While these won't officially be released until February 2008, pre-orders are being taken now exclusively through the Projekt and Middle Pillar webstores and are expected to ship by the end of 2007.

The new album mixes classical sensibilities with exotic electronics and acoustic instrumentation to complement the vocal depth listeners are familiar with from Dru and Summer. The vocals are supported with a melancholic arrangement of flute, hammered dulcimer, and live percussion mixing with multi-layered vocal stylings to invoke a range of emotional textures. 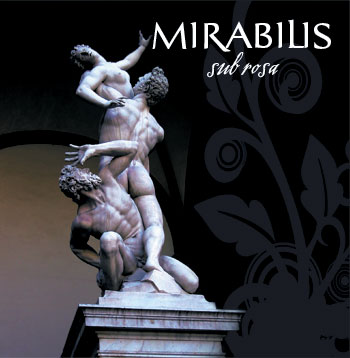 We're pleased to announce that our new album will be called Sub Rosa and should be released later in 2007. We have a two tracks available on our myspace page from the new album. We also have a number of beautiful promotional photos featuring beautiful custom-made gowns by Kambriel taken by Cindy Adzuki Chang and Roger Fracé on our myspace and on the images page on this site. We'll post here as soon as we have an official release date.

Dru will be performing live at Convergence 13 in Portland, OR. Don't miss Dru's special appearance at Convergence 13 - Sunday, May 27 1pm sharp. Dru will open the Victorian Sunday Mourning Rehydration Service with an a cappella solo set in support of vocalist/organist Soriah. Note to festival attendees: shuttle service is available to and from the convention hotel and venue.

We're also pleased to report that we're making great progress on the new album, in fact, it is essentially done. We have all the tracks recorded and we have mixes of all the songs that we're pretty happy with so far. There are a couple of things we need to work on for a few songs, but all in all, it's sounding really good.

We're hoping the album can come out this summer. Stay tuned for more!

Mirabilis is available on iTunes! Purchase individual tracks or buy the entire Pleiades album for $9.99. Click here to visit Mirabilis on the iTunes Music Store.

Mirabilis has a track on the upcoming tribute to Dead Can Dance on Projekt. Summoning the Muse is set for release on September 6. Visit the Projekt website for more information.

Mirabilis is back in the studio! We have begun work on our second full-length release. Stay tuned for more updates soon. We just added a Myspace account - add us to your friends! You'll also be able to catch a new Mirabilis recording on an upcoming compilation release in the next couple of months. More details shortly.

We released our debut CD early this year and we have received wonderful feedback so far (thanks to those who wrote amazing reviews at amazon.com). The album Pleiades, named after a mysterious star cluster which in Greek mythology told the fates of seven sisters, blends together the beautiful voices of Summer and Dru as well as guest vocalists Regeana Morris (from The Changelings), Katy Belle, and Rebecca Colleen Miller. The album opens and closes with a ghostly choir evoking the two sisters on the album cover art, and from there evenly explores the different aspects of the heavenly milieu.

You can hear the track "Riu Riu Chiu," an alternate unreleased version of "In the Dark" as well as "Tears" from the debut 7-inch EP on our sounds page.

Check out an interview with Dru and Summer at Grave Concerns website - http://www.angelfire.com/ny2/graveconcerns/mirabilisinterview.html.

This Ascension News From Dru

This Ascension will be playing a handful of shows on the east and west coasts this summer. The dates are:

the Machine in the Garden News From Summer

Roger and Summer are beginning work on the next full-length CD for release in 2005. More updates on this soon!

Visit the tMitG store for new lower prices on t-shirts and Veils and Shadows EP.
Start shopping now at http://www.tmitg.com/index.php?top=merch.html

The Machine in the Garden Fan Area is a new area with extra-special content: full-length song downloads, full-length videos, never-before-seen pictures, and more! It's also replacing the old mailing list signup, so if you're not on the tMitG mailing list, but want to be, go register for the Fan Area.

Mirabilis is proud to announce the release of our debut CD, Pleiades. The album opens and closes with a ghostly choir evoking the two sisters on the album cover art, and from there evenly explores the different aspects of the heavenly milieu. Featuring guest artists Regeana Morris of The Changelings, Katy Belle of Matson Belle, and introducing Rebecca Colleen Miller. Buy now from Middle Pillar.

The Mirabilis 7 inch EP is here! Our first offering is a 4 song EP released on Fossil Dungeon and features an exclusive track ("Pange Melos Lacrimosum") as well as an alternate version of "An Epitaph." It is presented in a lavish sleeve with cover artwork by Madeline von Foerster. Limited to 500 copies! The EP is available for order from Fossil Dungeon and Middle Pillar.

Pleiades is nearing completion and is set for release in November on Middle Pillar Presents. The cover art and a tracklisting have been posted on the releases page.

Dru and Summer just spent this past weekend in the studio wrapping up work on the debut full length, Pleiades, which is due out later this year. New photographs (including some glimpses into the studio recording sessions) were taken while Dru was in Austin recording. Check them out on the photos page. If you would like to be on the Mirabilis mailing list for an email when the CD is released, please send us an email with your email address and we will include you in future updates.

The website has been updated with a new look and added information about our upcoming 7-inch EP (due this summer) and the debut Mirabilis full-length, Pleiades, which is due later this year. Visit the releases page for more information.

Dru and Summer are pleased to announce the signing of Mirabilis to Middle Pillar Presents. Middle Pillar has fast become an establlished label in the gothic/ethereal genre and is home to the Machine in the Garden, The Changelings, The Mirror Reveals, Sumerland and others. Look for an album later this year.

Dru and Summer are still hard at work recording, having taken a break so Summer could finish up the most recent tMitG album, Asphodel. With that finished, they are back in the studio and are working for a release for 2003.

Welcome to the official Mirabilis website. Mirabilis is the musical project started by Dru of This Ascension and Summer Bowman of the Machine in the Garden. Check back for updates and announcements, or contact us to be added to our mailing list.